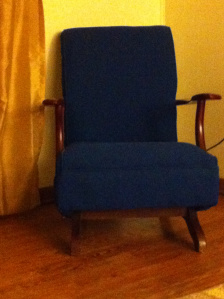 Often, I was the one who stayed an hour or so with Grandma so that Dad could bathe, eat dinner, or pay bills. I had one job: Make sure Grandma did not leave the house. How ironic it was that going home to her meant leaving the house that she and my grandfather built forty years before. Her mind was trapped in a much earlier time.The road that she traveled to get home was a rutted dirt road populated by horses and buggies and the occasional car that moved aside whenever the driver saw someone walking along the road. She did not recognize that it was seventy years later; by now the road was a major U.S. highway, well-traveled by cars and tractor-trailers that would not see her walking in the middle of the road until it was too late.